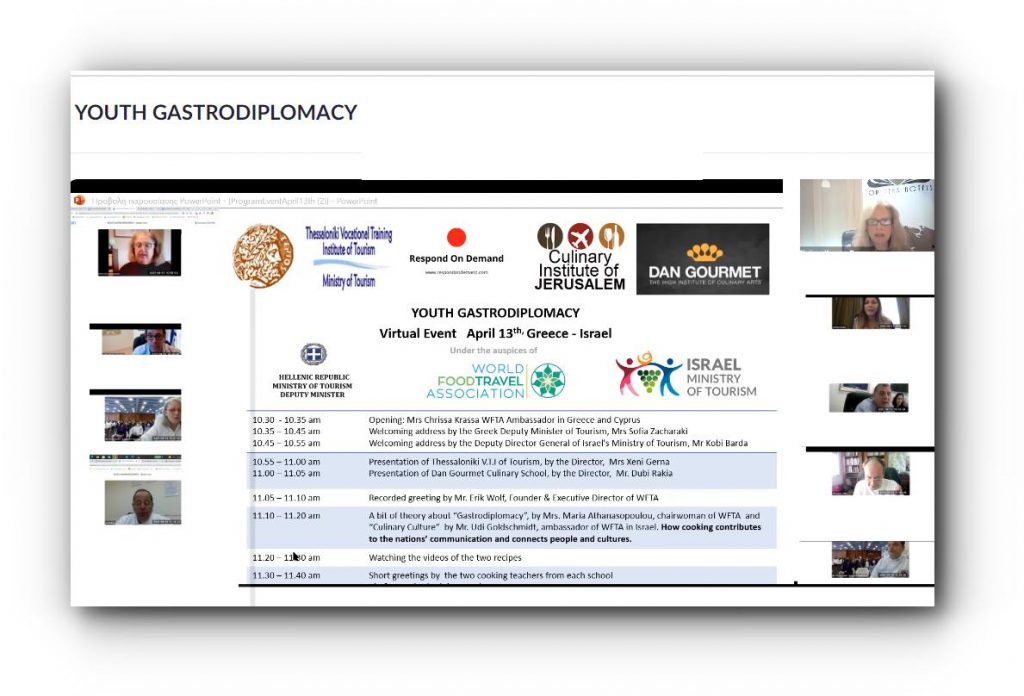 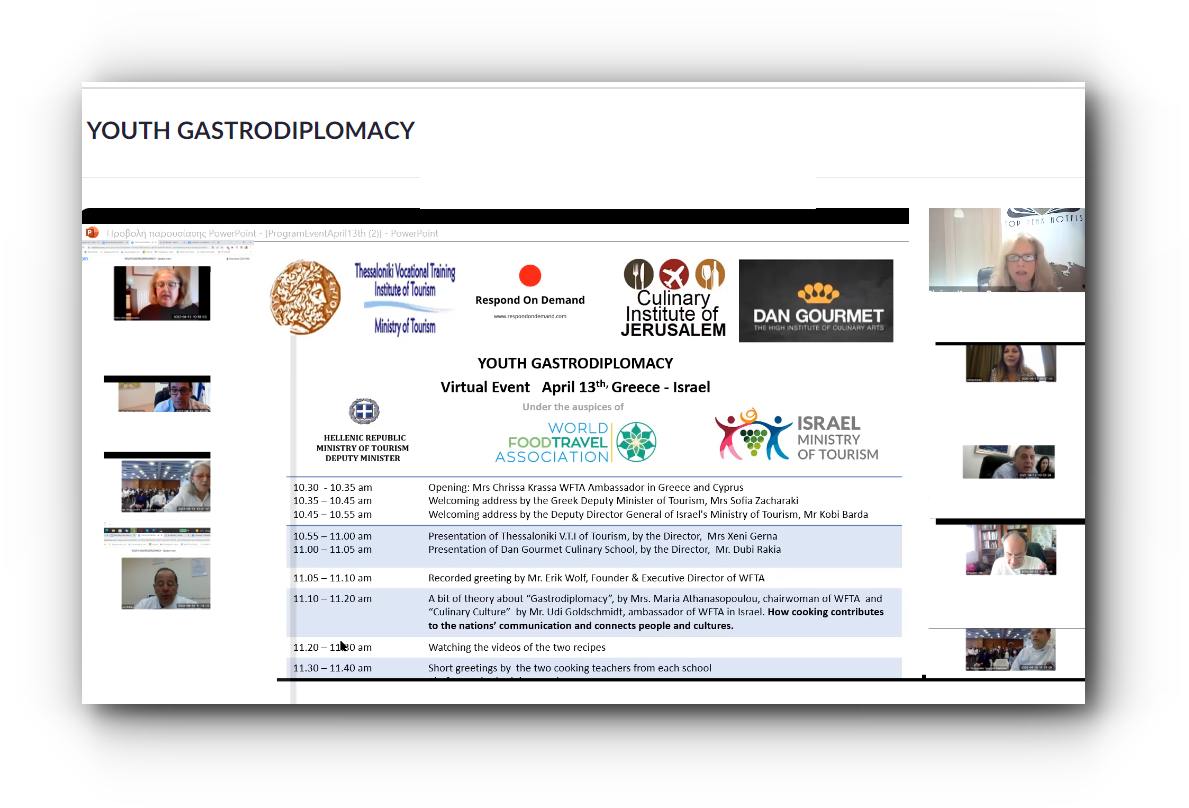 On April 13, 2022 culinary students in Greece and Israel came together to collaborate on a new project to teach culinary students about gastrodiplomacy, not just what it is, but also the practical application of gastrodiplomacy in their future career endeavors. The project’s concept was simple. A traditional recipe from one country would be cooked by culinary students from the other school. So students from the Greek tourism school (culinary arts department) cooked a traditional kosher dish from Israel, while the culinary school in Israel cooked a traditional recipe from the Thessaloniki region, in Greece. Each school recorded the cooking process and both videos were shown live during the event. You can watch the event here. Partners in Greece included the Thessaloniki Vocational Training Institute of Tourism , in cooperation with the tourism marketing company, Respond On Demand Ltd , with the support of the Greek Ministry of Tourism, working under the auspices of the World Food Travel Association (WFTA). The Israeli partners included the Israel Ministry of Tourism, the Culinary Institute of Jerusalem and the Dan Gourmet Culinary School. The event was introduced by the Greek Deputy Minister of Tourism, Mrs. Sophia Zacharaki and the Deputy Director-General of Israel’s Ministry of Tourism, Mr. Kobi Barda. Both Mrs. Xeni Gerna, Director of Thessaloniki Vocational Training Institute of Tourism and Mr. Dubi Rakia, director of the Dan Gourmet Culinary School, briefly introduced their schools to the international audience. Erik Wolf, the Founder & Executive Director of the World Food Travel Association, welcomed all delegates with a message that focused on the importance of gastrodiplomacy as a tool that fosters sociocultural sustainability through cross-cultural communication. Then Mrs. Maria Athanasopoulou, the chair of the Board of Directors of the WFTA, gave a short presentation about the history of gastrodiplomacy. She was followed by Udi Goldschmidt, the WFTA’s certified ambassador in Israel, who discussed the value of preserving culinary cultures. Right after, all participants had the chance to watch the two videos showing the preparation of each recipe. The head chefs of each school, Mr. Avi Schteiniz from Dan Gourmet (Israel) and Mr. Antonis Mastoras from the Thessaloniki Vocational Training Institute of Tourism (Greece) welcomed viewers from both countries.

The program was moderated by Mrs Chrissa Krassa, another of WFTA’s Ambassadors in Greece and Cyprus.  Although gastrodiplomacy started as a state initiative by various governments around the world, its scope is now reaching beyond political borders and governmental institutions. Comprehensive gastrodiplomacy projects are being developed and implemented by tourism and culinary students from all over the world. The project was the brainchild of the Thessaloniki Vocational Training Institute of Tourism based in Greece, a country with a long history of diplomacy and philosophy that still influences today many Western cultures.